Yu-Chun Lo
Yu-Chun Lo was born in northern Taiwan, and has been based in the Netherlands since 2015. She graduated with a bachelor 's degree in Man & Communication department from Design Academy Eindhoven in 2020. Yu-Chun Lo has broad interests in many different topics. Many of her works focused on how people’s behaviors are influenced by the inner world such as thinking, emotions, ideology and culture, etc, and aim to get a deeper understanding of what is the essence of being a human.

Zong Yuan​ Tien
Zong Yuan​ Tien is an architectural artist based on Tainan, Taiwan. He graduated with an M.Arch. degree in Architecture Design from NCKU in 2016, and became an architect in 2018. Now he is a member of Your Bros. Filmmaking Group, and has participated in various art scenes. His works often deal with spatial issue and motion images, and focus on the experimental expression of historical fragments and construction meaning on site.
Project Introduction

This project seeks to set up a museum to introduce and demonstrate future holy pig culture in Taiwan. We posit a science fiction scenario in which, after the year 2020, there will exist numerous parallel worlds. Owing to different outcomes to the African swine fever outbreak, the holy pig culture in each of these parallel worlds will evolve into different faith narratives. Just as 100 years ago the colonial economy and agricultural policies of Japanese rule produced a massive influence on holy pig culture, the numerous different particular cases in different parallel worlds will open up a diversity of future holy pig cultures. Through the form of a museum, changes to holy pig culture from each parallel world are condensed into every kind of imaginary object and image, and presented in this imaginary museum. Through the introduction of partial objects and fragmented narratives, the audience is led to piece together how the intervention of different factors may transform future religious culture. We hope that through these works the audience may reflect and explore how religiousness can be practiced in these different ways, if technology will become a help or a hindrance, and from these cases what insights we may glean into handed-down myths and taboos -- even a relationship between people, pigs and supernatural beings. 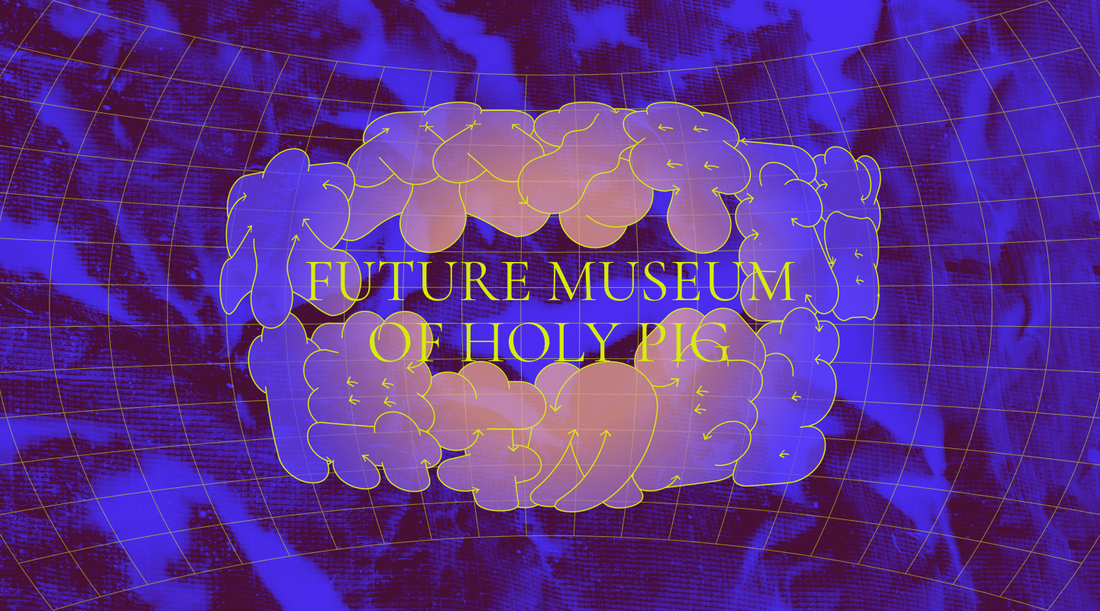 The museum has developed display systems for exhibiting Taiwan’s Holy Pig culture in several parallel worlds. Through archives demonstrating cultural and historical sources, technological devices breeding holy pig, and the interviews with experts and scholars, the museum guides the visitors to experience the development process of holy pig cultures respectively and to learn about the dynamic relationships between religious culture, human technology, and the natural environment.

​Due to the outbreak of the African swine fever in 2020, the world’s pigs are expecting extinction within a few years; meanwhile, the livestock industry structure has been dramatically affected. In the midst of the environmental changes, the holy pig culture in Taiwan’s traditional belief has also been seriously affected by the epidemic. In the past few decades, the world’s development has led to several parallel worlds, and the African swine fever has greatly changed the parallel worlds, respectively. Due to the butterfly effect, Taiwan’s holy pig culture has developed diverse divergences in the holy pig breeding and rituals. The museum’s research team has gradually obtained relevant information about three parallel worlds through long-term investigation and research. Furthermore, with the development of a novel multiverse display system, the audience can simultaneously see the various holy pig breeding systems, technological development, and religious culture’s evolution and changes. Till now, the museum is still searching for other traces of holy pig culture in other worlds, aiming to expand the museum collection and exhibition space capacity to bring more stories and processes of different holy pig cultures.
​
Architectural design of museum
Time-Space I

After the outbreak of the African swine fever in 2020, pigs worldwide become extinct within a few years. Since then, the livestock industry has undergone drastic changes, and other meat products and vegetal protein have gradually replaced the human consumption of pork. Consequently, Taiwan's holy pig culture has been greatly affected. However, some Hakka cultural institutions try to collaborate with local scientific teams and take pig cells, which have been long stored in the laboratories, as research materials. After several years of research and development, the scientists have cultured pig cells and developed a novel large-scale 3D bioprinter. The printer can accurately print the cultured cells on a 3D structure with a robotic arm. With this technology's research and development, every part of a pig can be printed with corresponding cells. Finally, a whole synthetic pig can be printed according to a real pig. The printed structure would be incubated in a monitored sterile space, letting the cells grow and occupy the whole 3D structure. In the end, people may offer a complete form of a pig to the gods.
​
Time-Space II

After the outbreak of the African swine fever in 2020, a large number of pigs die in the world within a few years. The development of treatments and vaccines cannot keep pace with the transmission of the epidemic, and the livestock industry has undergone drastic changes. Most of the pigs die due to virus infection during the breeding process, and only a small number of pigs can survive. Human consumption of pork is declining. Since its rarity, pork becomes an ingredient only available on specific occasions. For the health of the pigs, large pig farms being to collaborate with veterinary medical centers. Besides, governmental sectors also invest in the sterile Specific Pathogen Free (SPF) pigs breeding system, where healthy pigs are isolated and kept in a positive pressure space to avoid infection.

Although the sterile breeding system building successfully prevents the extinction of pigs, breeding and keeping pigs are still challenging. Most of the relevant industries have come to an end. Only large pig farms remain in business. The epidemic fluctuations have become a new norm of pig farming. Such a situation has affected the holy pig customs. In the face of the rampant epidemic, the feeding system with the SPF technology is no longer able to produce holy pig at the same size and weight as before, and it is usually challenging for the pigs to survive from being infected and dying. Therefore, the holy pig competition is gradually changing from a weight competition to a survival competition against the virus. The capital, sterile equipment, and epidemic prevention capabilities have become critical factors in winning the competition.
Time-Space III

After the outbreak of the African swine fever in 2020, swine were largely infected worldwide within a few years. Fortunately, the treatment and vaccine were developed promptly. With global efforts, the virus's spread was seized efficiently, and the epidemic was gradually brought under control. Although Taiwan's holy pig culture was once threatened, the vaccine's development allowed the industry to resume its original state of breeding and rituals gradually. The epidemic disease has reinforced worshippers' faith in breeding the holy pig, believing that it demonstrated a spiritual connection with the gods once they survive the epidemic. However, the conflicts between contemporary issues of animal rights protection and the holy pig culture get more intense. The believers try to create a more accurate breeding system for calculating and feeding to demonstrate their devotion to the faith.
This parallel world coincided with an era of rapid advances in brain science, where scientists were increasingly able to accurately analyze the biological and chemical workings of different regions of the brain. The human mind's workings are essential in religious rituals, and this aspect of brain research has been directly applied in the development of many traditional religious transitions. Among them, the brainwave apparatus that captures the brain waves and calculates the worshipper's devotion index is most widely used in various religions. The brainwave instrument's development also influences the holy pig's beliefs and customs, and believers and engineers have collaborated in developing a digital housing system linked to the brainwave instrument. In this system, the devotees will wear the brainwave device, and then the devotional index calculated by the device will be converted into a nutrient infusion machine. The higher the index, the more the machine will inject enough nutrients into the pig. Conversely, the conveyor will not provide any more nutrients. Such a feeding system makes believers who want to show their sincerity turn to raising their pigs at home instead of buying them from professional holy pig farmers. The entire customary culture has also been transformed into an emerging customary structure of faith through the application of digital technology and brain science, in an attempt to defend against the charge that the holy pig culture is deliberately tied to profit in animal protection controversies.
Proudly powered by Weebly